Vital Years Secondary School, Zaria, Kaduna State, has emerged the winner of the maiden edition of the MTN Foundation Theatre for Schools Competition organised for secondary schools across Nigeria.

The Theatre for Schools Competition is an initiative of the social investment vehicle of MTN, dubbed MTN Foundation.

It represents one of the three focus areas of its sustainability initiative. With a focus on Arts and Culture, the initiative is aimed at creating a platform for students to build capacity in the performing arts, stimulating public interest in Nigerian Arts and Culture as well as encourage the adoption of theatre from an early age by talented young Nigerians.

To achieve the level of impact required in the arts and culture space, MTN Foundation is determined to continuously explore secondary school-level development of Arts and Culture.

The maiden edition of the Competition which drew participants from secondary schools across the country had its regional competitions in Ibadan, Zaria and Port-Harcourt respectively.

Idikan Baptist Comprehensive College of Ibadan emerged regional champion from the Ibadan zone while Nigeria Navy Secondary School of Port-Harcourt were the regional winners for that zone. The eventual national winner, Vital Years Secondary School, emerged from the Zaria zone.

Accompanied by their respective coaching teams, the regional teams arrived Lagos to compete for the one million Naira (N1,000,000.00) prize money.

The keenly contested final saw a great display of budding talents from the young aspiring actors.

The judges were made-up of seasoned theatre practitioners like Bimbo Manuel, Tina Mba, Afeez Oyetoro, Kemi Lala Akindoju and Patrick Jude Ote who is the artistic director of the Jos Repertory Theatre.

Speaking at the grand finale, Nonny Ugboma, Executive Secretary, MTN Foundation, thanked the management, coaches, and students of all the schools that took part in the competition. 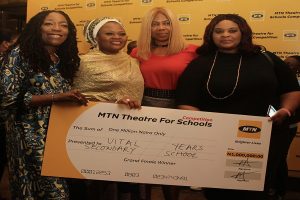 She commended the efforts of the finalists and applauded the stand-out performance of the eventual winner, Vital Years Secondary School.

She noted that; “Without a doubt, this was a keenly contested competition and you will agree with me that the best team won.

“The passion, creativity and sheer depth of composure displayed by these students only help to re-confirm that our decision to invest in the grassroots development of local talent was the right economic and human development decision.”

The 2019 MTN Foundation Theatre for Schools competition was implemented in collaboration with the theatre arts departments of the Ahmadu Bello University (ABU), the University of Ibadan and the University of Port Harcourt. Each school received state-of-the-art equipment worth two million, five hundred thousand naira (N2, 500,000.00) each to enhance their creative practice.

The MTN Foundation’s Arts and Culture causes has for the last five years supported shows, plays, musicals and initiatives that aim to tell authentically Nigerian stories.

Recent productions supported by the Foundation include critically acclaimed shows as Fela and the Kalakuta Queens, Legends, the Musical, the Life in My City Art Festival in Enugu, Our Son The Minister, the Made in Nigeria Poetry Show and High: The Play.

Maltina Continues Trail of Happiness With Its Campaign, Happiness In The Little Things

Ugo Onwuaso is an ICT enthusiast. He believes technology should be used for general good. He holds a Master of Public Administration (MPA) degree from the Lagos state University.

The Federal Airports Authority of Nigeria (FAAN) has advised passengers and other airport users to comply with all quarantine procedures at the nation’s airports.

FAAN said the advice is in an effort to protect passengers from the epidemic ravaging some countries and to prevent the spread of such communicable diseases into Nigeria,

FAAN said that all the equipment and personnel used in combating the deadly Ebola virus in 2014 are still very much in place at the airports.

“FAAN has always had thermal scanners in her airports that monitor temperature of passengers and capture their pictures. When passengers walk pass the scanner, it registers their temperature and if too high, they are pulled aside for observation,” FAAN stated in a statement.

Recall that recently, a deadly virus known as CORONAVIRUS broke out in China and has since killed six people, with over 300 also reported to have been infected.

The virus is highly communicable and has already spread to boarder countries like Japan, Thailand and South Korea.

The viruses can make people sick, usually with a mild to moderate upper respiratory tract illness, similar to a common cold. Coronavirus symptoms include a runny nose, cough, sore throat, possibly a headache and maybe a fever, which can last for a couple of days.

For those with a weakened immune system, the elderly and the very young, there’s a chance the virus could cause a lower, and much more serious, respiratory tract illness like a pneumonia or bronchitis.

FAAN, in collaboration with the Federal Ministry of Health, have confirmed the adequacy of the facilities at the nation’s airports to prevent the importation of the virus through the airports.

Passengers are therefore, advised to submit themselves for routine quarantine checks whenever they are asked to.

Visa announced that Nigerian Athlete Divine Oduduru has been signed on to their global Team Visa program for the Olympic Games Tokyo 2020.

Team Visa athletes are selected based on their expected demonstration of strong competitive performance at the Olympic and Paralympic Games, regardless of nationality and background. They are selected based on their personal journey, competitive achievements and community involvement. In talent as well as character, its members represent Visa’s values of acceptance, partnership and inclusion.

Divine Oduduru, is the second fastest athlete in Africa after finishing 100 metres race in 9.86 seconds and 200 meters in 19.73 seconds at the NCAA championships this year.

He actively began his career in 2007 and has since gone on to set groundbreaking records at both local and international levels.

The Nigerian sprint sensation broke into limelight five years ago at the 2014 World Junior Athletic Championship, and recently made his debut as a pro-athlete at World Championship Diamond’s league with active preparations underway for his participation at the Olympic Games Tokyo 2020.

Speaking on the signing, Divine Oduduru, said: “Joining other athletes from across the world as part of Team Visa has been a dream come true for me.

“As a track and field athlete, having a strong support system is important and so it means so much to me to have a partner in my corner that provides me with the same opportunities as other athletes competing in Tokyo 2020. I am very proud and honored to be representing Nigeria and Team Visa at the Olympics next year.”

“We are excited to welcome Divine Oduduru into TeamVisa for the highly anticipated Olympic Games Tokyo 2020 tournament said. His dedication, record of accomplishment and consistency in the track and field category over the years, has set him apart.

At Visa, we embrace the culture of extending support to sports men and women to assist them in ways that can motivate them and enable them achieve their goals,” said Kemi Okusanya, Vice President, Visa West Africa

“Divine’s journey has been truly remarkable and inspiring. His tenacity, dedication and passion to the sport are a perfect fit for Team Visa,” she added. “We hope to provide him with a global stage at The Olympics to tell his story and inspire other athletes in Nigeria to follow their dreams and never give up.”

Visa has been a global Olympic partner for more than 30 years and the first and longest-standing global Paralympic partner (since 2003). Since 2000, Team Visa has given aspiring athletes the support they need to pursue their goals, both on and off the field of competition, regardless of origin or background.

Visa provides tools and resources – including funding support and financial literacy training – through its Team Visa program. Since the programme began in 2000, Team Visa has supported over 400 Olympic and Paralympic athletes and hopefuls from around the world.

The UK-Africa Investment Summit that was held in London on Monday resolved to Scaling up Investment for Africa’s Clean Energy Transformation.

Ahead of the UK-hosted UN Climate Summit (COP26) later this year, a central theme of the UK-Africa Investment Summit was support for African leaders’ call to accelerate investment in secure, low-cost and low carbon energy.

During the Summit, the UK Government committed to use its expertise and experience to partner with African countries to help them transition away from fossil fuels towards renewable, sustainable forms of clean energy.

“In the year the UK is set to host the UN climate summit, COP26, we put clean energy at the heart of the UK-Africa Investment Summit.

Over the past 12 months, campaigners, including the inspirational Greta Thunberg, have shone a spotlight on the urgency for immediate and ambitious action to reduce the potentially devastating impact of climate change.

I am proud that the UK government is showing leadership, including through our legally-binding commitment to reach net zero emissions by 2050.

And I am delighted that Nigeria too is playing a leadership role, demonstrated through the strong participation at the UK-Africa Investment Summit by the Minister of State for the Environment Sharon Ikeazor and Nigerian national Damilola Ogunbiyi, who moderated the panel discussion on clean energy transition.

At the Summit, the UK announced a range of partnerships with African countries that I hope will support Nigerian leadership in setting an ambitious National Determined Contribution (NDC) to global emissions reduction targets.

In particular, I hope that the £10m (over ₦4.7billion) UK Climate Finance Accelerator will help Nigeria secure greater investments in green energy, increasing the availability of sustainable power and creating new jobs.”

In total more than £50m (₦28.6billion) of new UK investment was pledged at the Summit for clean energy projects across Africa and new links were forged between UK and African companies, investors and policymakers to promote clean energy usage.